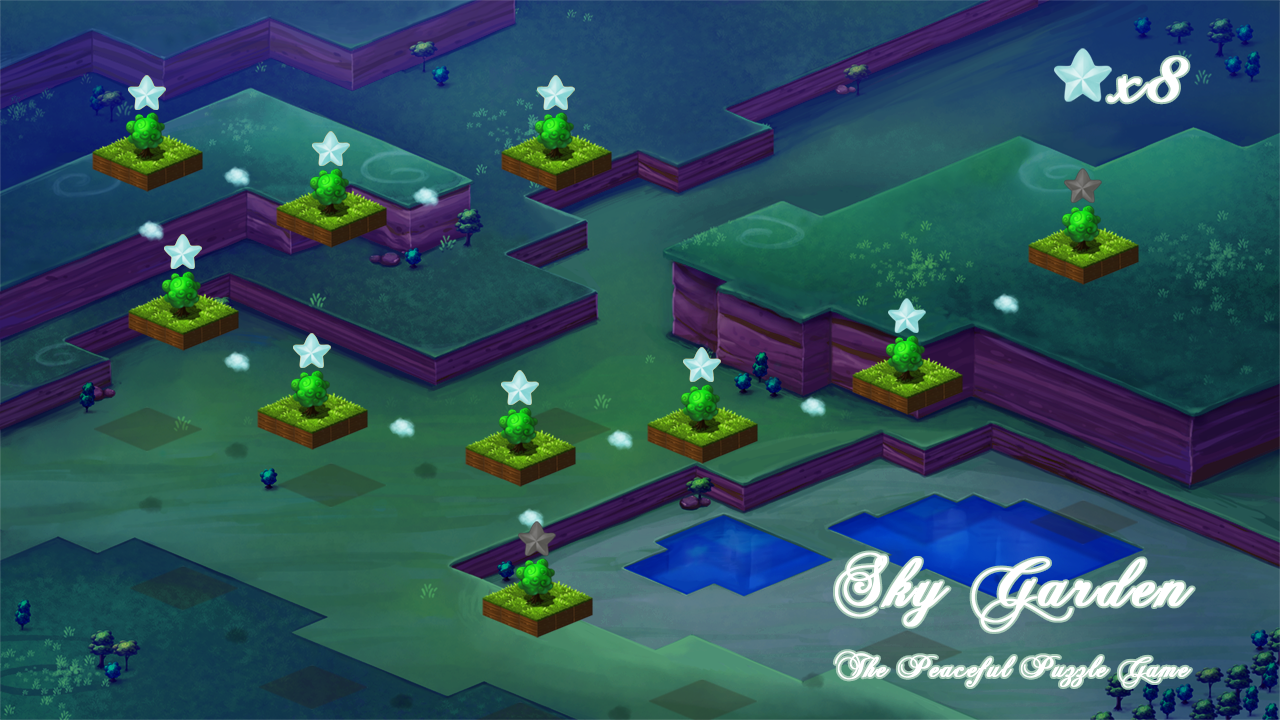 An oldie but goodie, one of my favorite world maps is from Super Mario Bros. 3.

As you navigated through the Mushroom Kingdom you would constantly see things that you wanted to access, but you didn’t know how. How would you get past this rock? How do I get over to that island? Where does that pipe come out? The map generated lots of compelling curiosity gaps.

And for satisfying this curiosity, there were a myriad of solutions. There were roadblocks that would be your way and you had to defeat an enemy (which was done inside a level) to pass through (which was outside of the level). You could get a cloud to skip over levels, or go in nonlinear directions to explore item houses and other areas of the map with treasure. You could go in pipes and find yourself in a totally new area. You could even sail around on the ocean in a hacky world-map canoe (which blew my mind as a kid!) 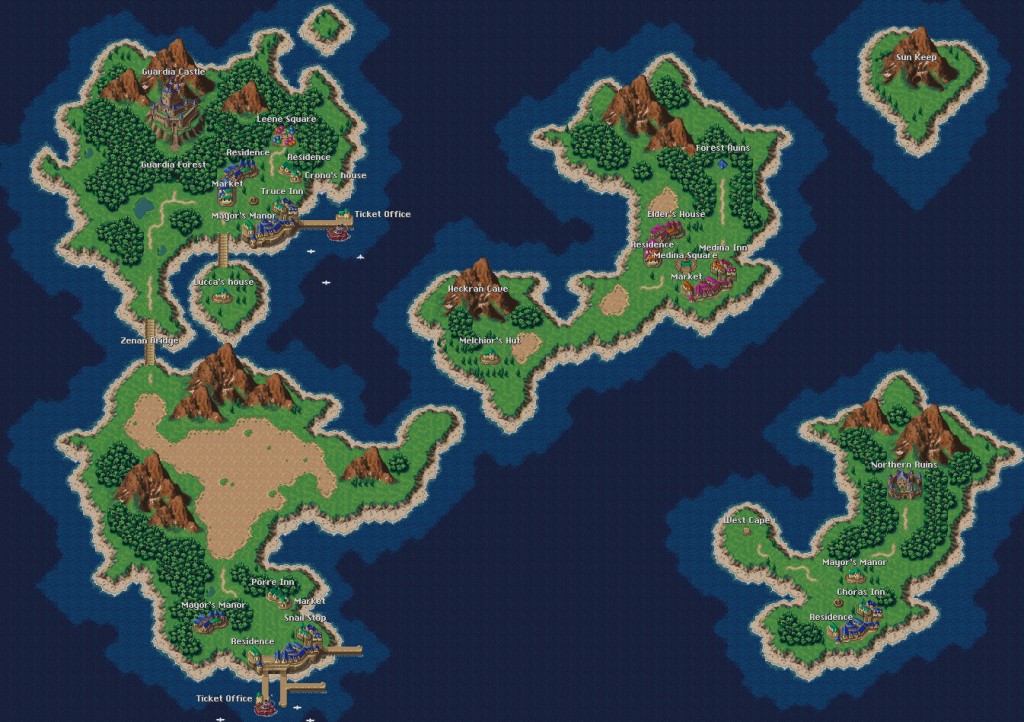 Chrono Trigger was another era-defining game with an awesome symbolic world map. You would walk around with your little party in this large world, and your character size would be much smaller (which felt fun).

Same as Super Mario Bros. 3, there were areas of wonder that you couldn’t access. What’s over the Zenan Bridge, and how do I get there? What’s across the ocean? Getting to a new area was always exciting. Additionally since you had to physically walk to an area to enter it, you found yourself poking your nose in all these rocks and trees just to see if there was a hidden location.

The element of time changing also provided a huge sense of wonder. When you went to a different time, then it fired off all of these ideas in your mind of where you needed to go check. “Hmm, now that I’m in this era, I wonder what’s over where Lucca’s house used to be?” There was plenty to do, plenty to explore.

Even finding nothing would be interesting, because it told a story. “Wow, this area used to be a city, but now it’s NOTHING! What happened…?” This is a great example of a game world map that evoked wonder through tiny symbols. 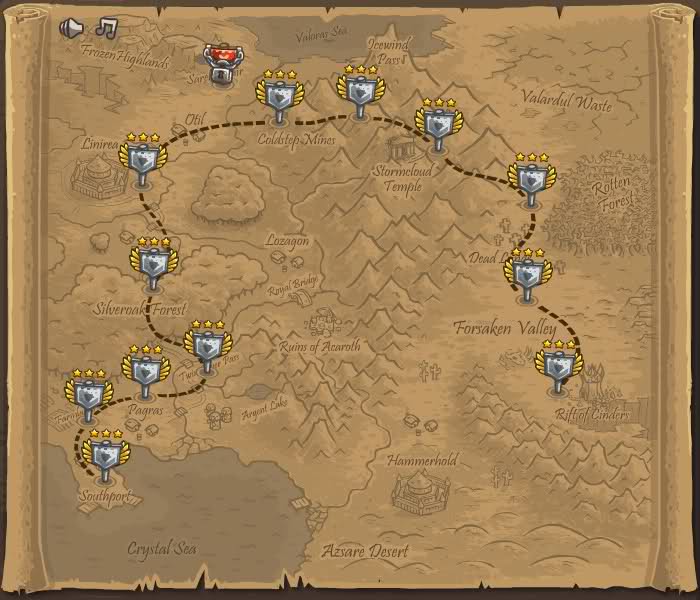 Kingdom rush is a popular Flash and mobile game that also has a fun world map. It’s styled as an old scroll, so you can almost start to imagine yourself as a medieval king plotting an army attack with his advisers.

The gorgeous artwork also lets you look ahead and get excited about where you’re going. When will we get to reach Hammerhold? What lies in store for us by the crystal sea? Will we be able to play with that dock?

Finally, the map is full of delightful animations. Seagulls fly overhead, soft puffs of smoke pop out of cottages, and if you wait for it, then you’ll see a ship sail out to sea only to be wrapped in giant tentacles and pulled underwater. I laughed pretty hard the first time I saw that. It all gives a feeling that the world is alive and moving.

One missed opportunity (in my opinion) on the Kingdom Rush maps is extra elements that aren’t tappable. There are some things that look very interesting, but have no level for you to dive into. This can be a bit disappointing. But overall it’s a fantastic game world map. 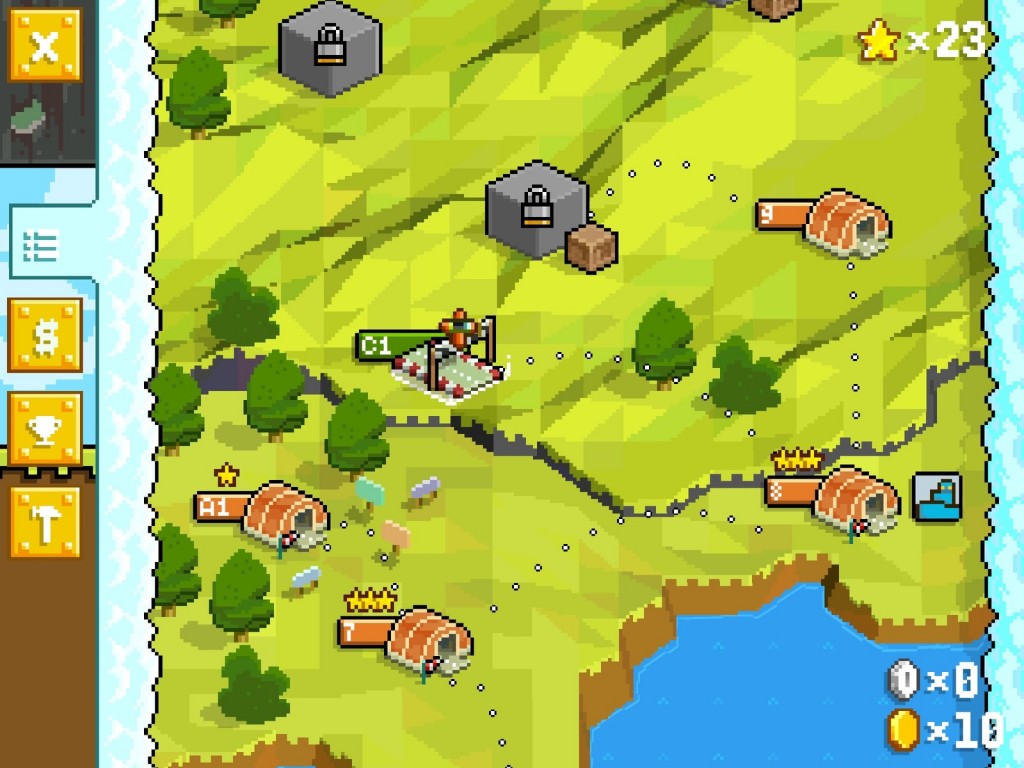 Retry is a more recent mobile game by Rovio and Level 11 that attempts a throwback to level maps of yore. They had an old school 8-bit style world map, complete with branching paths and fun icons for levels. If you get stuck on one level, then you can just go around it, which already makes it much, much better than a lot of the linear styled mobile games out there today.

Another fun thing the Retry team did was create different styles of levels. They have “normal levels” but also “challenge levels” and “boss stages”, all of which have their own icons on the map. The first time you see these it’s a real treat – you want to know what’s inside.

Retry was a huge influence on me. It was during playing this game that I decided that I really wanted sky garden to have a game world map.

So what makes a good level map?

Based on these influences, these are the elements that I hope to include in the game world map for Sky Garden:

We’ve had a lot of fun developing our game world map so far, hopefully we can live up to the giants who came before us!

Join our newsletter for fun bonuses!

Did you enjoy this post? Then you can see more pieces of Sky Garden concept art by joining our Newsletter!

You’ll also get a Desktop Version of the Sky Garden Prototype and a Video Walkthrough of the game.

Sign up for our Newsletter below to see the art and get the game!