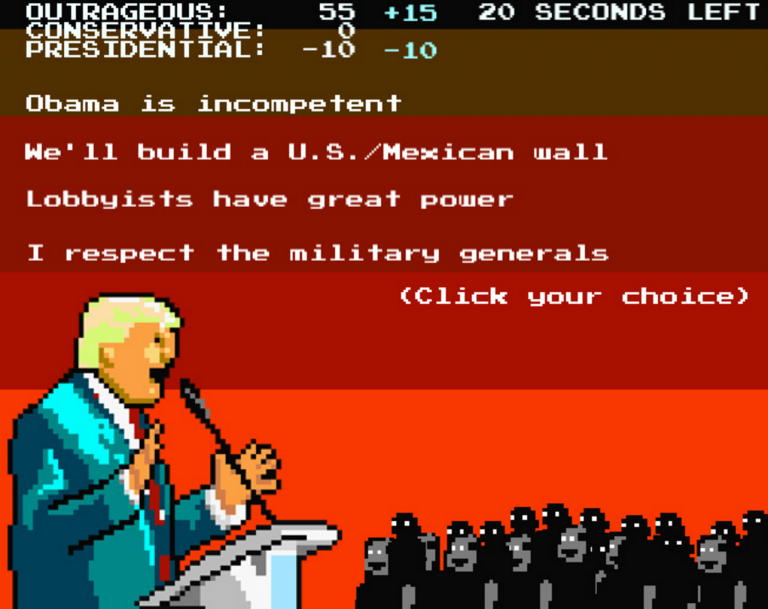 This past weekend was Ludum Dare, an indie game competition where you make a game around a certain theme in 48 hours. The theme was “Shapeshift”, and many of the entries were really impressive. My personal favorites by other developers were Down the Well and  Tito’s Revenge.

I made an entry around Donald Trump, the current frontrunner for the U.S. Republican candidacy. It’s a parody game where you attempt to mimic the “shapeshifting” Trump has been doing in his persona and personality. I’m personally not a supporter of Donald Trump, but this story has been interesting to me.

If you’re interested, you can play the made-in-48-hours version here, or the updated, slightly more polished version here.

Donald Trump is a political shapeshifter, radically changing how he acts and what he stands for in order to win each stage of the U.S. Presidential Election. He began as an outrageous TV personality, has now moved to a slightly more subdued Republican frontrunner. Some suspect that if he receives the nomination, will move to a more presidential-sounding moderate candidate in order to win.

Play as Donald and make OUTRAGEOUS, CONSERVATIVE, or PRESIDENTIAL comments, depending on the stage.

A fun game? Or a terrifying reality? You decide!

(Note: I personally do not support Donald Trump)

This game was inspired by the blog of Scott Adams. He’s been discussing at length how Trump is using advanced persuasion to systematically win at each stage in the election cycle. Scott predicted that Trump would win the general election in a landslide way back in August 2015, when Nate Silver of data-driven political blog FiveThirtyEight gave him just a 2% chance. At the time it sounded like an amusing joke.

But in Scott’s words, “What I see from my perspective as a trained hypnotist is that Trump brought a flame thrower to a stick fight.”

The concept that Trump says crazy sounding things is a tired joke at this point. However what interested me about Scott’s commentary is that the spectacle is all very calculated. At each stage Trump seems unconcerned with coming off as a legitimate politician, or sounding professional, or anything like that.

Rather, at each stage, he’s just doing whatever needs to be done to win. No matter how twisted it seems to people who don’t understand what’s happening.

Based on this, Scott predicts that over the next few months, Trump will begin to sound more presidential. Trump himself has said this, that he will change his act. So the game attempts to capture this upcoming transformation.