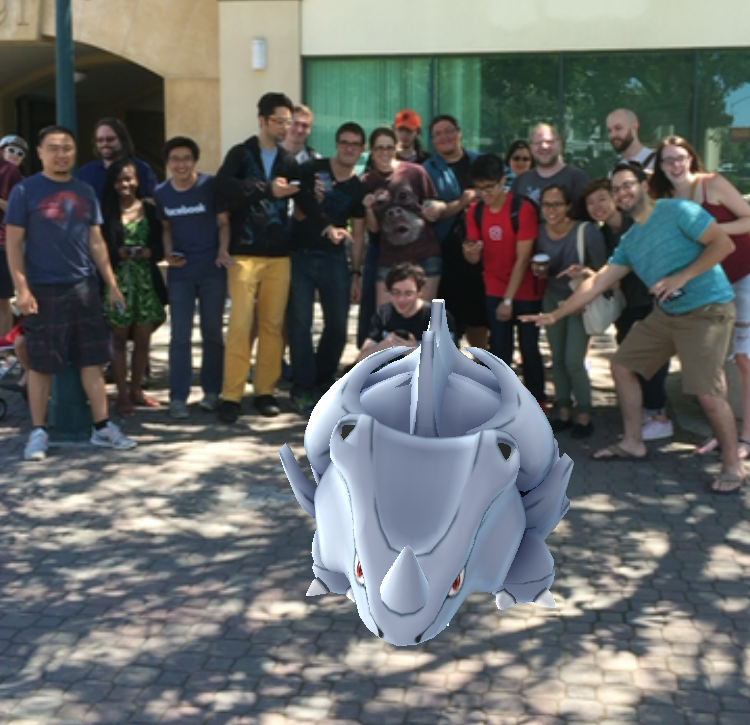 The first weekend Pokemon Go was released, I headed downtown to play and find some hot spots. I was amazed to meet over 40 people (pictured) at the same location, all playing Pokemon Go. None of the people in this photo know one another, but we were all there because of the lures attracting lots of pokemon.

If you’ve played the game you know that finding these crowds are smile-inducing surprises. It’s fun to suddenly be among a crowd of strangers who are all doing the same activity you are doing. You inevitably end up talking, swapping tips, and making friends. When the lures are up everyone disperses. It is a truly unusual and unique gaming experience.

Whenever there is technological advancement, new gameplay systems appear that create precedents for future games. When The Legend Of Zelda shipped as the first Nintendo cartridge with a battery pack, it created new standards around the idea of Save Files. When Zynga’s FarmVille took off in 2009, social networks were flooded with requests for hammers and nails to build their items, a design now standardized across hundreds of games.

Pokemon Go is no different. As the most successful GPS-enabled game ever made, new system designs are driving new types of behavior that no other game has been capable of.

One of the most interesting of these systems is the game’s ability to create systemic crowds. These come from a game design that encourages two or more people appearing at a physical location at the same time.

So how do these systemic crowds work? What is driving this behavior? And how could the same system be applied to other games in the future?

[Caveat: aspects of this design may be attributable to Pokemon Go’s predecessor, Ingress. This article only focuses on Pokemon Go, since that’s the one most people are familiar with, including myself.]

Pokemon Go creates systemic crowds with their lure system. Players can place a lure at a Pokestop to attract more pokemon. Other players can see this in their games, and then travel to that physical location to share in the bounty, which benefits everyone.

First the crowd obviously needs a specific geographic location to congregate at, small enough in size to elicit face-to-face interaction. Pokemon Go uses their Pokestops as fixed points on the map to accomplish this. The lures occupy a limited area less than 50 meters in diameter, meaning that in order to reap the benefit, players need to be physically standing close. But almost any physical location will do, as long as it’s easily found in both the game and real world.

With the location selected, the design then needs to signal to other players that something special is happening. This signal acts as a lighthouse, telling players where they need to travel. If there was no way to see the signal from a distance, then a crowd would never gather.

In Pokemon Go, all players can see lures through sprinkling pink confetti on the Pokestops.This is what gets them to go to a specific location and gather as a crowd rather than walk aimlessly.

Signaling also brings with it an important tuning value: the Max Visible Distance, which is the distance beyond which player’s can’t see. In Pokemon Go, players can see Pokestops and lures up to about 1.5 kilometers away. This value must work in conjunction with other tuning values as we’ll see in a moment.

Third, the location needs to deliver a benefit that many players want. It’s important that this benefit is open to everyone who comes to the location at the right time.

Traditional MMO’s don’t work like this: usually only one player can take each item from a loot drop. While this design works for MMOs, it’s not conducive to systemic crowds. It’s only because there is “enough for everyone” that the crowd gathers.

In Pokemon Go, this benefit is an abundance of pokemon near the lures, far more than appear normally. By going to the location, players can all catch the same pokemon, some of them extremely rare.

Fourth, the systemic crowd requires a positive spiral, meaning that each arriving player has the potential to increase the benefits pool for both themselves and everyone else. A single person could in theory contribute everything, but that would be prohibitively expensive for most players. Instead, multiple players are incentivized to increase the benefits for themselves, which in turn increases the benefits for all and stacks their contributions on top of each other.

In Pokemon Go, a single lure is not likely to attract much attention from pokemon. But three, four, five, or more lures in the same area will unleash a deluge of pokemon, and thus becomes a huge draw for players. This stacking effect encourages others to add in their own lures when they see a location is really hopping.

If one lure is started and a player walks over, they have an incentive to add a second. Other players are now incentivized to add a third, and so on. The effect is a positive feedback look where every lure added increases the odds that someone will add another, stacking the benefits.

Finally, the systemic crowd needs to have an optimal duration. There’s two boundaries to this tuning value.

First, the duration needs be short enough that players feel the compulsion to go to the location right away. If lures were 24 hours in duration, then players may see a lure and think: “Hey, there’s a lure over there…meh, I’ll head over in a few hours.” The result would be that the number of people who joined the crowd would be spread out along a larger period of time, possibly never meeting each other face to face. However a relatively short time like 30 minutes creates the same psychological response as a limited time sale about to run out: “Whoa, I’ve got to go now!”

Second, the duration needs to be long enough that players can travel to the location in time to reap the benefits. The view in Pokemon Go allows you to see lures about 1.5 km in the distance. If you pair this with the 30 minute duration and an average walking speed of 5 km/hr, then any visible lure can be walked to and still allow for 12 minutes of pokemon catching (see above image).

If the duration was 15 minutes, there’s no way you’d be able to walk the mile to get there. Players would constantly see lures they can’t reach in time:

These two factors, Max Visible Distance and Duration, need to be balanced together for this reason.

If you look at these five components, you’ll realize that systemic crowds are not so different from hosting a normal real world party. The only difference is that the game itself facilitates instead of a human “host”.

By making sure that all of these components are built, any game could in theory have the same crowd-pleasing effects.