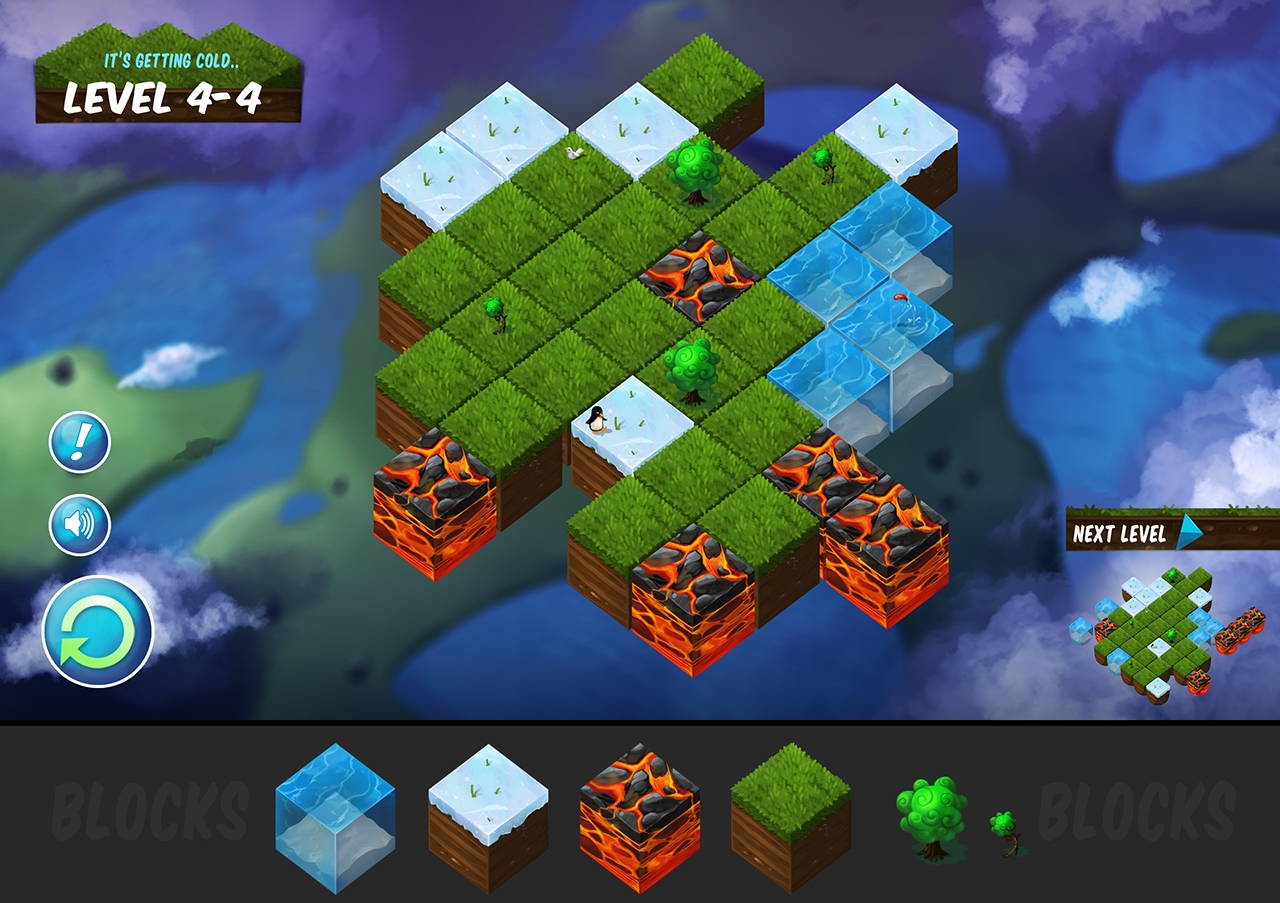 How do you discover a game’s art style?

For the Flash prototype of Sky Garden I did all the art myself. I did an OK job I’d say, but far from what anyone would expect from a commercial product. So one of the first orders of business was to figure out what our new art style would be. This involves a lot of things all coming together including color palette, shapes we use, rules for how things feel. Is the game “rigid” or “soft”? “Friendly” or “confident”? These were all things that needed to get figured out.

I decided the best way to tackle all of these questions at once was to do a screenshot – just a single piece of concept art that has lots of different elements together, that looks like a full playable screenshot from the game, that results in the final art style. After that’s done then the individual assets can be cut up and put into a programmed first version.

Here was the screenshot from the original flash game I picked. I picked this one specifically because it has so many different elements for us to figure out: trees, seeds, lava, water, ice, background, everything. I didn’t want us to miss something (lava blocks for example) and then find it’s difficult to fit it in later because the style doesn’t match. 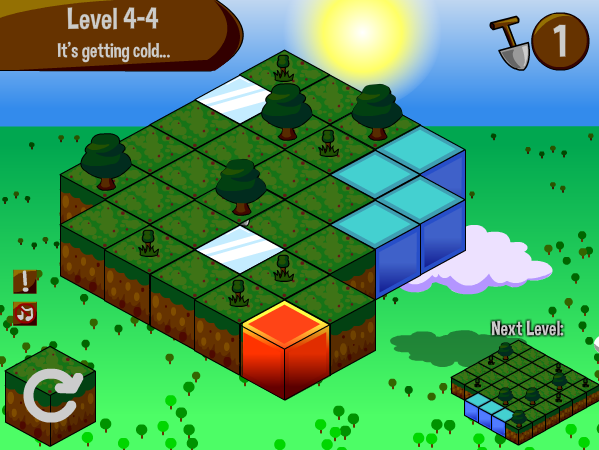 From there I started reaching out to different artists and having them work on concepts based on the screenshot. I’ll share a lot of the favorites that didn’t make it in future posts. For this post I’ll walk through some of the decisions that got us to our final art style.

Here’s one of the early concepts from the talented Agung Wulandana that grabbed my attention: 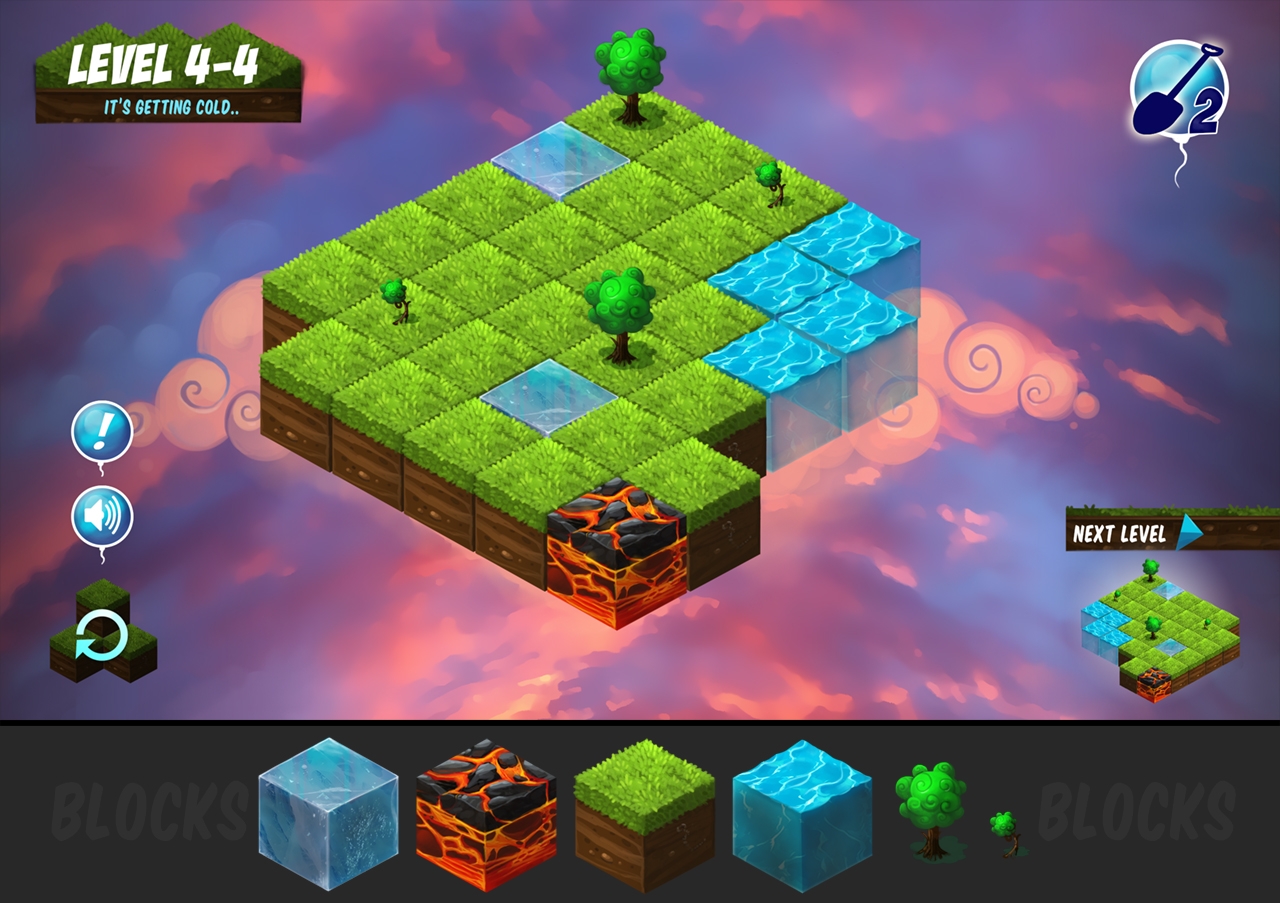 Agung’s swirls on the trees are what I think made me fall in love with this. It’s fun, it’s very creative looking, and it’s playful without being too kiddy. Since the game is meant to appeal to puzzle lovers (mostly adults) then these were important.

The sunset was also really appealing, but after discussing it with my wife (she is a fantastic “second opinion”) then we decided it actually was too jarring and pulled attention away from the game board.

So that let us to this next version: 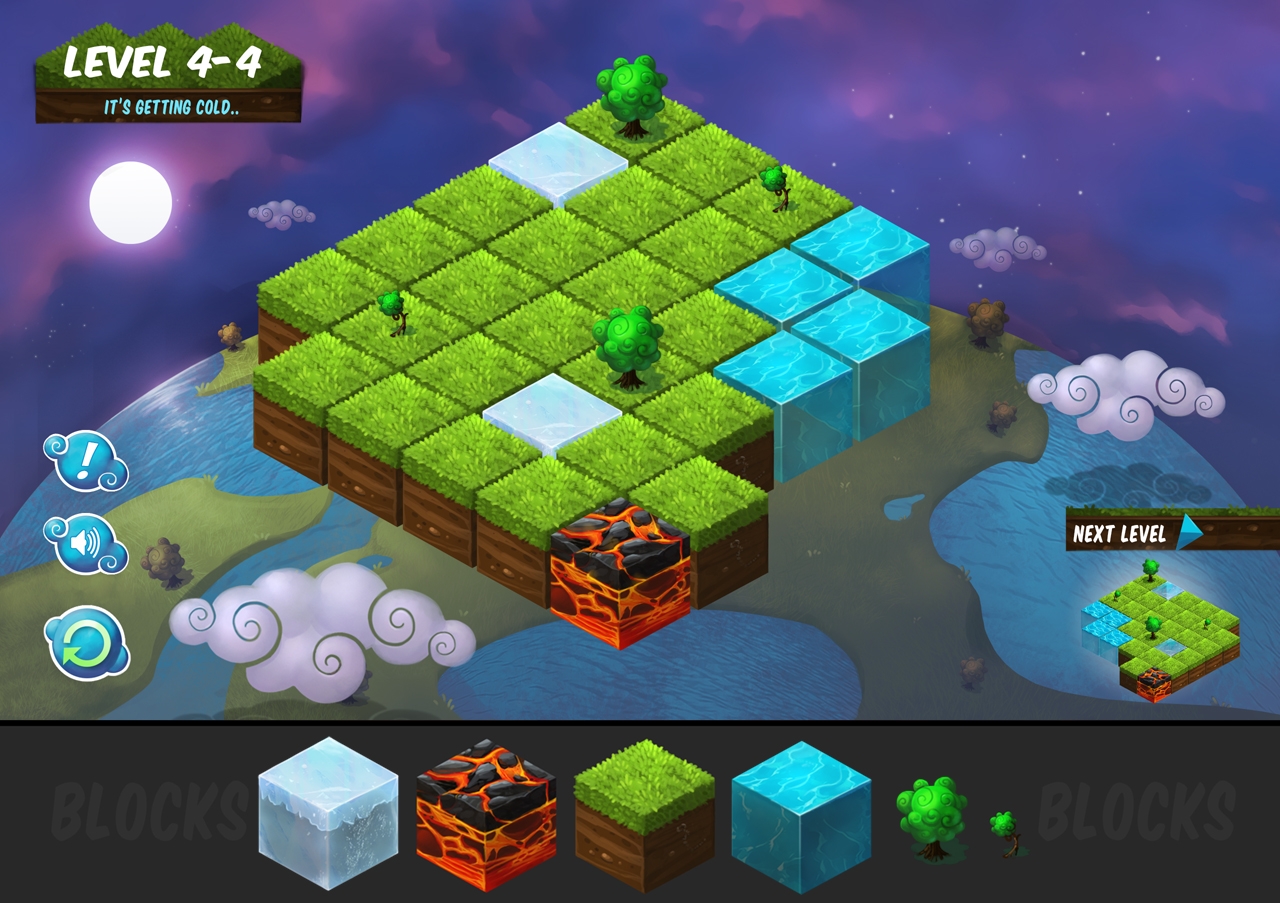 We switched to night time because we thought that it would help calm the scene down (it is meant to be a soothing game) and also bring focus more to the game board. This was a success. The curved earth, however, looked too childish and toy like to me. I wanted the game to look inviting, but not like it was for kids.

We also tried doing a bit more separate space between the blocks, which was a good experiment but a mistake I think. We also went heavy on the swirls – I guess I got too enamored with them! I like to think that the best artists understand subtlety, while amateurs are always “in your face”. So we decided to scale back on the swirls in the next version.

Another thing that we wanted to fix was the neon green grass. This worked better in the hyper-saturated original image, but it made it, again, look too kiddy and cartoony.

Finally I realized something else: we needed to pitch the camera up. The view on this screenshot would make the blocks hard to tap, since on a 2D screen they wouldn’t have much surface area. In order to fix this, we decided we needed to tilt the blocks up like this: 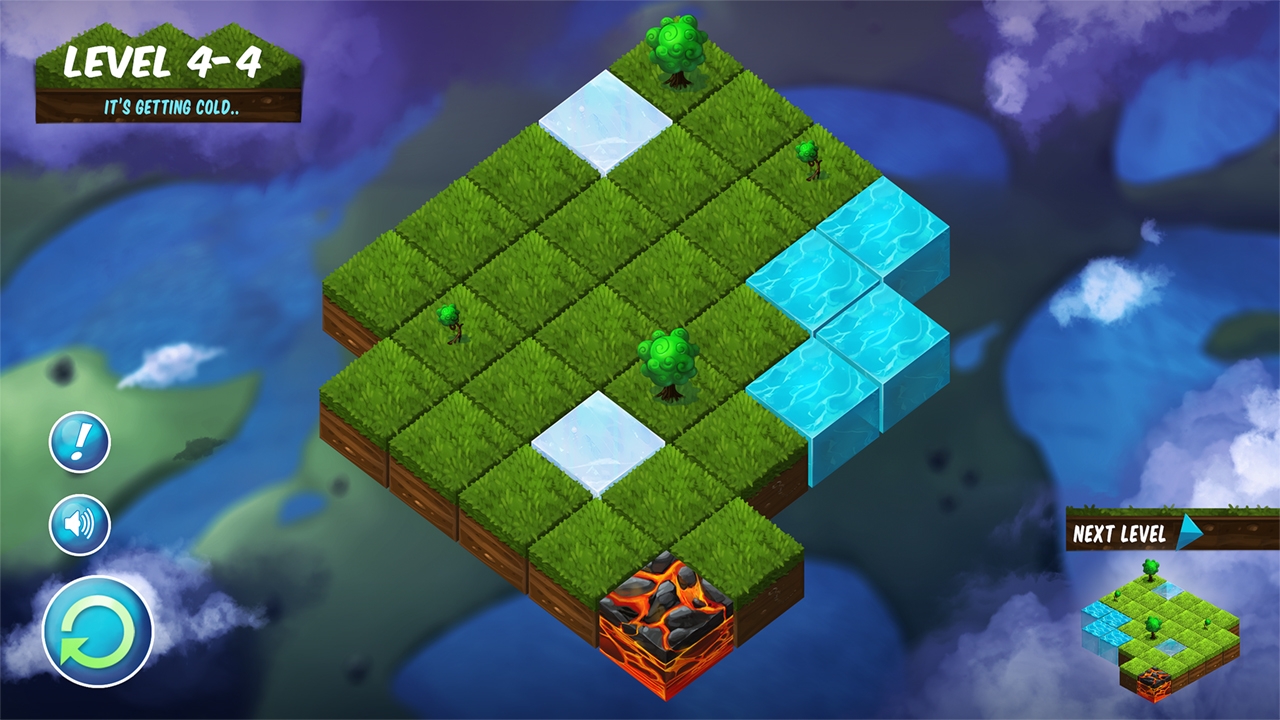 This was pretty close, it was all starting to come together. Here we made some final tweaks that really brought it home.

First, we had the idea of adding animals – a penguin and a bird. These are so fun in the final piece of concept art that I think we’ll have to add them as a gameplay feature.

Additionally we played around with changing the other blocks. Because tapping an ice block will turn it into a grass block, it made sense to have dirt underneath instead of a solid block of ice. Also we came up with the idea of doing sand at the bottom of the water blocks, like you were looking at an aquarium. This really gives it a fresh feel, different from Minecraft or other block type games.

Which brings us to our final piece:

And now we have our art style! 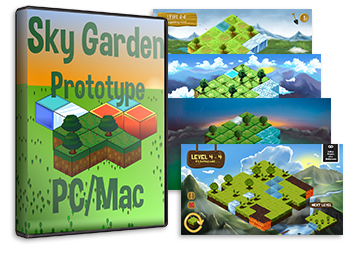 If you liked this post, then you can see more pieces of Sky Garden concept art by joining our Newsletter!

You’ll also get a Desktop Version of the Sky Garden Prototype and a Video Walkthrough of the game.

Sign up for our Newsletter below to see the art and get the game!